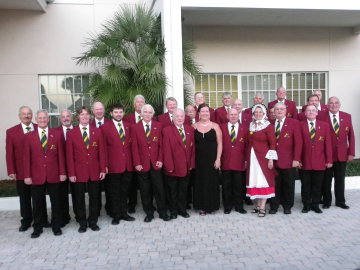 Well, we have just returned from an absolutely fantastic and successful trip to Sarasota in Florida, America where a good time was definitely had by all. We departed on our trip on 20th/24th November and returned on Dec 5th.

Whilst on tour in Italy in 2013 a chance meeting with a retired American businessman originally from Wales by the name of Lawrence Parry led to the choir being invited to sing at a number of community events during the recent 2014 Thanksgiving period in Sarasota, Florida, USA including singing at the Gala dinner linked to the Sarasota International cricket festival.

The tour proved to be a great success , during the choirs 10 day stay in Sarasota songs from their latest CD ‘Afan Valley Voices’ were played regularly on the local Sarasota radio station resulting in many impromptu performances being requested by members of the public wherever the choir were visiting on any given day, providing fond memories that will long be cherished , one such occasion took place on a packed service bus whilst travelling on a 40 minute journey to an American shopping mall on Thanksgiving Day, when a large Hamish family  and the bus driver joined in the singing, the event was recorded by  one local  passenger who named the clip on u tube  as ‘The happy Sarasota Thanksgiving bus’.

The following comments made by Amy Ferrell president of the Gulf Coast St David’s Welsh Society on the occasion of the final concert summed up the successes of a memorable tour where the singing of Bois Afan won over many new friends in the sunshine state.

‘Our first visit by a Welsh choir was a tremendous success, thanks to many of us working on it together, inviting friends, posting flyers, enlisting the help of radio and TV, papers, and online calendars etc  .  The Bois Afan Choir delighted us all, and with smiles and tears and enthusiastic applause we showed our appreciation for their beautiful singing.  Our audience was estimated at around 500.  We needed several re-printings of our program, and still people had to share. We could not have guessed we would have such a turn-out.  We are very grateful to First United Methodist Church for hosting the choir and including it in their Open Doors schedule of programs for the community.’

The main concert on tour was held at the impressive setting of the United Methodist Church in Pineapple Avenue Sarasota whose stage with its grand piano would rival many purpose built concert Halls. The event was staged by the ‘Gulf Coast St David’s Welsh Society’, with Bois Afan having the distinction of being the first Welsh choir to visit the society in their 30 year history.

The Society were unsure prior to the event what sort of numbers would be attending, however word had obviously travelled around the Sarasota community about a Welsh choir being in town as on the night of the concert there was a packed audience of over 500 who were entertained by Bois Afan with a varied programme which included Welsh classics such as Gwahoddiad and Calon Lan to more contemporary songs such as Calender Girl by Neil Sedaka and Bring Him Home from the musical Le Miserable.

With only 23 choristers on tour the challenge of singing at such a prestigious venue caused more than a few flutters of nerves prior to going on stage. The one big advantage Bois Afan had on the night was the outstanding talents of our musical director Wendy Murphy who over the past few years has worked tirelessly to perfect every song performed by the Bois, subsequently the evening was a great success with more than a few tears being shed by members of the appreciative audience who gave a rousing standing ovation at the end of the night followed by the singing of both the Welsh and American national anthems.

Prior to going on tour the choir had worked extremely hard performing at numerous venues to raise funds for the tour which was paid for entirely by themselves. The choirs chairman Owen Hughes would like to acknowledge all those individuals and sponsors who contributed to making the tour such a great success, adding ‘ I was extremely proud to represent the choir as chairman on this tour and in particular on the evening of our last concert, our performance did ourselves the Afan valley community and Wales proud’